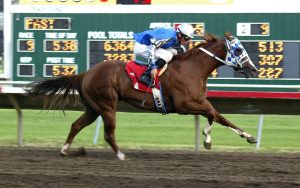 Winter in New York is when lesser-known stables can make some hay. So can handicappers who pick up on the not-so-household names who get consistently good results.

Though he is a second-generation horseman well known on his home turf at Finger Lakes, and though his 4 wins from 17 starters last winter racked up an impressive return on investment of $7.70, Daniel Conway Jr. has continued to fly under the radar of most bettors at Aqueduct this winter.

“I kind of like to do that,” said Conway, whose father was inducted into the Finger Lakes Hall of Fame after amassing 822 wins and three training titles there, and was a major figure for the National Horse Show Association of America before that.

“I’m here trying to beat the odds,” said Conway, a native of Canandaigua, N.Y., who trained for 25 years, gave it up to spend more time with his family, and returned to the game seven years ago.

“I had a ‘regular job’ for 10 years,” he said. “This is my passion, though. We keep a string [downstate] in the winter, and it’s become a nice spot for me. I’m getting a broader group of clients, and every year we hope it’ll get better.

“It used to be that you were able to lay horses up, but you can’t lay them up anymore. When they’re going good, you’ve got to run them.”

Through mid-March that philosophy had paid off handsomely, with 6 wins from 27 starters and a fat $4.57 ROI. Five winners paid 4-1 or better, including Methodtomymadness twice, with front-running scores in February at $18.40 and $10. Methodtomymadness, a veteran campaigner claimed for $7,500 back in December, banked more than $50,000 in his first four starts for Conway.

The two biggest Conway-trained upsets at the meet involved distance switchers who had finished off the board in their previous start: Daddy’s B.E.T. ($44.40) was stretching out from six furlongs to a mile; Tell Me First ($26.60) was turning back from a mile to six furlongs.

The common thread of all the winners was go-to rider Nazario Alvarado.

“It’s actually a funny story how we got together,” Conway said. “Three years ago I was doing laundry, and he came into the laundromat with his family. I said, ‘You beat me right on the money the other day.’ He said, ‘I know how you can fix that – ride me.’ He’s a great kid; he comes out every morning and works hard.”

Though he only recently returned from a five-month layoff with one start in late February, the star of the stable is still the 8-year-old Rises the Phoenix, an eight-time winner of nearly $300,000 for Conway, including four wins on Aqueduct’s inner dirt (he won back-to-back starts last winter at $27 and $23.20), and the $50,000 Wadsworth Memorial Handicap last July.