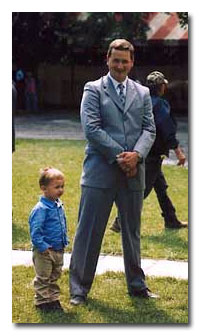 Was born and raised in Louisville , Kentucky , as a child his father would take him to Churchill Downs where he began his interest in horse racing. George learned to read the form and knew from a very early age he wanted to be a thoroughbred horse trainer. When in high school George started working as a hotwalker for John Hennig, who taught him the ropes, he worked summers with the intent of learning the business.

Quick to give him horses were top owners in the industry such as W. Cothran “Cot” Campbell and Mike Ryan. George’s resume has paid off, in just three starts he won his first race with First Spear who paid $27.80, in December of 2004 just thirteen months of operating a public stable George won his first stake race “The Open Mind Stake” with Fond and then just four months later went on to win his first Graded stake win “The Gotham” with Saratoga County. In two years of training George’s total earnings add up to $1,724,041.

Cindy Hutter, George’s wife is a respected horseman in her own right. Cindy was born and raised in Romansville, Pennsylvania which is neighboring to the horse country of Unionville, Pennsylvania . The area, known for its steeplechase farms is where Jonathan Shepard and Bruce Miller reside. Cindy started riding at a very young age, at the age of sixteen went to work for Bruce Miller where she would spend summers at nearby Delaware Park riding race horses.

At the age of twenty-three Cindy went to work for D. Wayne Lukas, off and on for eight to ten years. During that time she galloped great stake horses such as; Open Mind, Winning Colors, Thunder Gulch and Slanders. When Todd Pletcher left Lukas to start his own stable Cindy went with him as an assistant trainer. Cindy worked for Pletcher for seven years during that time, galloped and was the assistant for great horses such as; More Than Ready, Jersey Girl, Graeme Hall, Archers Bay, Impeachment, Trippi and Balto Star. Today George and Cindy work as a team combining their wide knowledge of horsemanship and the horse racing industry.

Ben Weaver, George and Cindy’s son enjoys coming out to the barn in the mornings and riding in the golf cart around the backstretch.